Skip below to the results, otherwise read on to learn more about our specific use case.

At Nightfall, our mission is to detect sensitive data. Today, we detect 50+ types of sensitive data, including social security numbers, API keys, street addresses, and more. Practically, this means building a content inspection pipeline that can:

But how do we identify sensitive information in arbitrary text data?

The answer is: it’s complicated. At a high level, we use (a) purely ML based NLP models and (b) a combination of machine learning techniques, validation heuristics, and regular expressions. This post will focus on how we optimized the regular expression use case of approach (b) to detecting sensitive information.

We start off by filtering the input data by running it through a list of hard-coded regexes to pull out the data most likely to be sensitive. This step is critical for scanning data at scale because it limits the data we run through computationally expensive ML models. For instance, if we are scanning a long history of chat messages between a customer support agent and a customer to see if any sensitive information like credit card numbers were leaked, we can use regexes to pull out only the chat messages with 16 digit numbers to limit the data we feed to our ML models, which make the final decision.

We initially used the Go standard library regexp package for our regular expression needs, but as we scaled we quickly ran into bottlenecks in speed and resource utilization. To better handle this increasing scale, we began investigating alternative regex libraries. We started by benchmarking other regular expression libraries, notably Google’s re2 and Intel’s hyperscan.

Our benchmark used three file sizes that represent typical input: 10 KB, 100 KB, and 500 KB. The files were made up of generated random English dictionary words with numbers up to 16 digits sprinkled in 10% of the time to simulate potential identifiers like credit card numbers. Here’s an example snippet from one of the files:

The benchmarks were run on a 2019 16-inch Macbook Pro with 2.6 GHz 6-Core Intel Core i7 processor, 16 GB 2667 MHz DDR4 of memory, and an AMD Radeon Pro 5300M 4 GB graphics card using go test -bench . -benchmem. My Go OS is darwin and Go Arch is amd64. This command runs the benchmarks multiple times automatically until they converge into a consistent speed so that they are resilient to any variations in performance that may be due to other programs running in the background.

The speed comparison should be an apples-to-apples comparison for the most part. The memory usage comparison, however, isn’t quite the same. For instance, re2 returns all the matches back at once while hyperscan returns them one at a time with a callback function.

Re2 returns a []Matches.

Hyperscan returns the arguments from the following callback. In this benchmark, I manually constructed a map[uint][]match stored matches as they were returned. 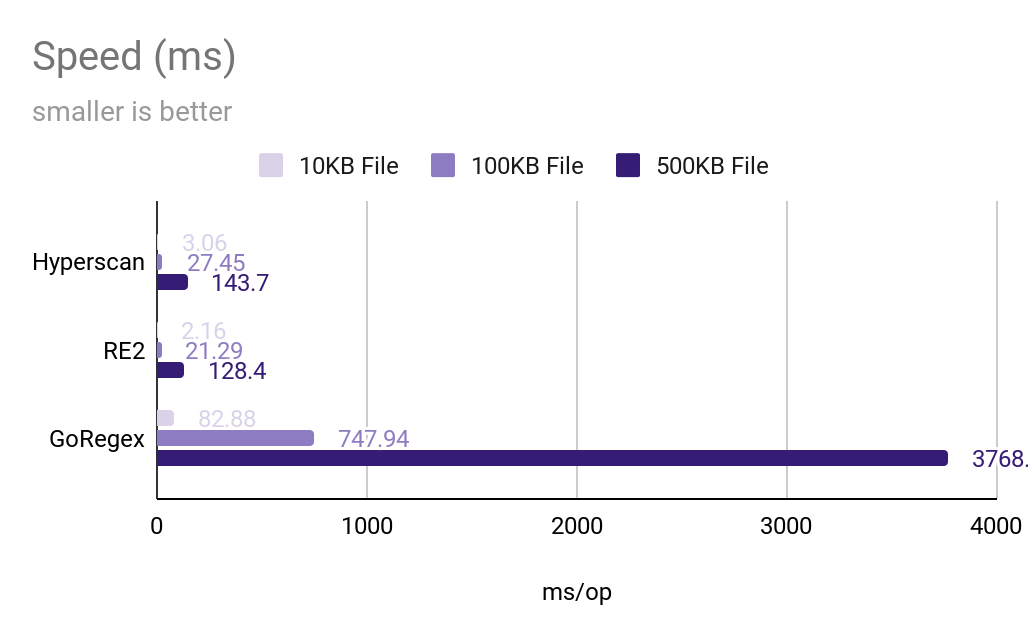 The default Go regexp library was definitely the slowest and most memory intensive. re2 and hyperscan were about 30x to 40x faster and used up to 7x less memory.

Hyperscan and re2’s speed were quite similar with re2 being 1.12x to 1.4x faster depending on the file size. As file size increased, the speed gap between them narrowed

Hyperscan typically used around 2.7x to 3.9x the memory as re2. Also note that re2 returns all matches while hyperscan returns each match in a callback function, which may or may not better suit your use case. Hyperscan is also optimized for Intel processors, so running these benchmarks on a different CPU would also affect results.

Nightfall is the industry’s first cloud-native DLP platform that discovers, classifies, and protects data via machine learning. Nightfall is designed to work with popular SaaS applications like Slack, Google Drive, GitHub, Confluence, Jira, and many more via our Developer Platform. You can schedule a demo with us below to see the Nightfall platform in action.

Select a time that works for you below for 30 minutes. Once confirmed, you’ll receive a calendar invite with a Zoom link. If you don’t see a suitable time, please reach out to us via email at sales@nightfall.ai.